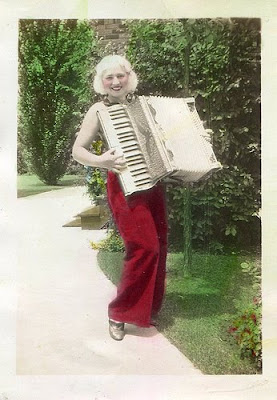 "Gladys had it all worked out. First, she would become a music-hall sensation. Next, cameo appearances in movies. Then, her acute intelligence as well as her virtuoso accordion skills would come to the attention of the authorities, who would draft her as a secret agent selected for a dangerous but vital mission: to be the golden-haired girl who would tempt the world's second-most-powerful man away from his dowdy, intellectual wife, fatally weakening him with her siren's charms. And plain old Gladys Gunderson would become, at last, Mrs. Joseph Stalin!"

Machtige rode pantalon ook! Gladys has it all!!!