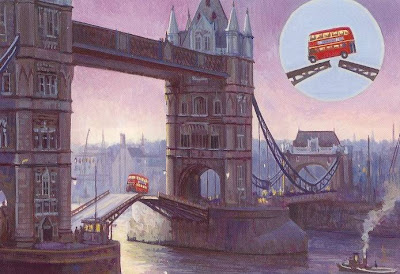 Many a motorist has lived through the experience and awakened in his bed to find it was only a bad dream. Last week London Bus Driver Albert Gunter, 46, knew that it was no dream. With 20 passengers in his double-decker bus, Albert was just starting across the draw in London's Tower Bridge, as he had hundreds of times before. Suddenly, he said later, "it seemed as though the roadway in front of me was falling away." Albert started to jam on his brakes. Then he changed his mind.
"Everything happened terribly quickly," he said. "I realized that the part we were on was rising. It was horrifying. I felt we had to keep on or we might be flung into the river. So I accelerated." Up and up slowly went the bridge span; on and on Albert drove his bus. At the end of the span, Albert, his conductor and all 20 passengers soared off into space, leaped the widening gap and landed with a horrendous thump on the southern span six feet below. "I thought that might start going up too," said Albert, "so I just kept right on till I got to the other bank."
Results: a broken spring for the bus; a broken leg for the conductor; minor injuries for twelve passengers; a £10 ($28) bonus to Albert for his quick thinking.

"Sir, there is nothing too little for so little a creature as man. It is by studying little things that we attain the great knowledge of having as little misery and as much happiness as possible."
James Boswell, The Life of Samuel Johnson, LL.D. (1793).

"You know my method. It is founded upon the observation of trifles."