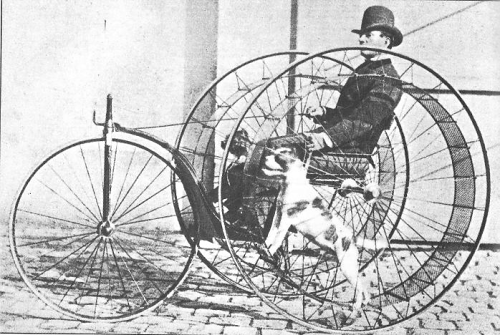 A French engineer designed an apparatus called a Cynosphere. It was a tricycle with a small steering wheel in front and two large and curious wheels behind. Each of the rear wheels was shaped like a circular cage and contained a large dog. These “power-plants” rolled the carriage ahead by running squirrel-fashion on narrow tracks.

The operator sat in a sulky seat between the wheels and could throw the motors into “high” by exhibiting food or even a cat on special occasions. Whenever the dogs became tired, the engineer pointed out, the operator could change engines by replacing them with other animals. Patents on the idea were taken out both in France and the United States. The French Society for the Prevention of Cruelty to Animals was consulted and was said to have given its sanction to the plan.