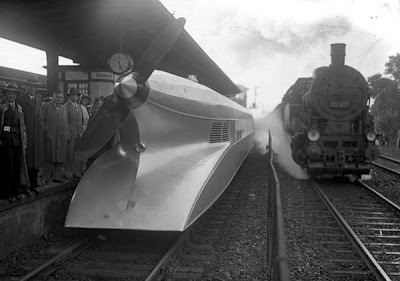 "Conceived and built in 1930 by the German rail company Deutsche Reichsbahn, the Schienenzeppelin was a design alternative to the streamlined steam locomotives of its day. It was a slick and relatively lightweight at 20 tons, running on but two axles and powered by a 46-liter BMW V-12.
The same engine was later used to power the light bombers of the Luftwaffe. The engine sent 600 horsepower to a massive ash propeller, tilted seven degrees to produce downforce. It was one of those designs that would shock and delight even in these times.

Originally good for 120 mph -- on par with the fastest streamlined steam locomotives -- the Schienenzeppelin topped out at a magnificent 140 mph in the summer of 1931. It was a record that stood for 23 years and was never surpassed by a gasoline-powered locomotive."