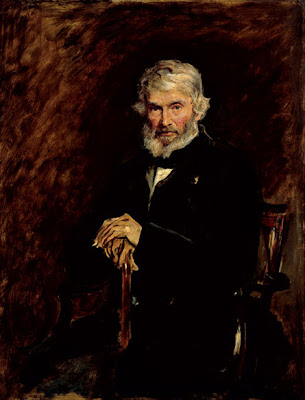 At midnight on the evening of March 6, a hysterical Mill appeared at Carlyle’s door and delivered the news that one of his servants mistook Carlyle’s manuscript for wastepaper and threw it in the fire. “Poor manuscript, all except some four tattered leaves, was annihilated!” he wrote of the upsetting news.

Carlyle now had to reconstruct the first book. There were no drafts or backup copies from which to work. He didn’t take notes. His method was to read, then write like mad. Sections he found lacking were tossed in the fire. “I was as a little Schoolboy, who had laboriously written out his Copy as he could, and was shewing it not without satisfaction to the Master: but . . . the Master had suddenly torn it, saying: ‘No, boy, thou must go and write it better.’”

Mill felt terrible and asked if Carlyle would accept £200 to “repair . . . the loss . . . of time and labour—that is of income?” Embarrassed by the offer, but in financial straits, Carlyle accepted half the sum. Wanting to demonstrate there were no hard feelings, Carlyle suggested that Mill read the first section of book two. Grateful for the renewed trust, Mill agreed, but suggested that Carlyle give the manuscript to Harriet Taylor for safekeeping. Carlyle did not approve of Mill’s intimate relationship with the married Taylor. He also believed that she played a part in the accident, as Mill had confessed he’d read the manuscript to her. Carlyle never delivered the pages and the book went to print without Mill’s comments.

Rewriting the first book was torture for Carlyle. The destroyed manuscript became an ideal in his mind, allowing him to despair at the poor quality of the new draft. He initially made good progress, but abandoned its writing in favor of reading the “trashiest heap of novels.” After his reading holiday, he began again, completing the first and second chapters by the beginning of May. By September 1835, he had rewritten book one. He finished the second book at the end of April 1836. Book three went slower. “The Revolution History goes on about as ill as anybody could wish,” he wrote his brother. “I sit down to write, there is not an idea discernible in the head of me; one dull cloud of pain and stupidity; it is only with an effort like swimming for life that I get begun to think at all.” On January 12, 1837, two years after he began, Carlyle completed book three, “ready both to weep and pray.”